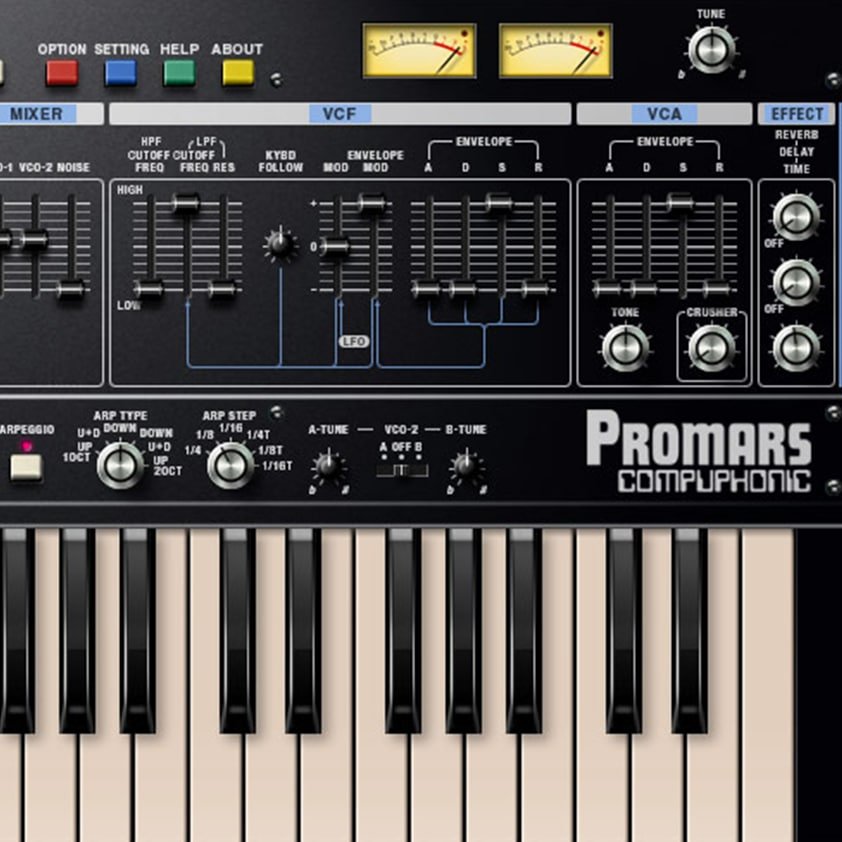 The Roland Icon Series is a collection of articles looking back at the most popular and recognised Roland instruments. In over four decades, Roland has designed many world-first instruments like the first touch-sensitive keyboard and first guitar synthesizer.

Contributed by Christian Moraga for the Roland Resource Centre 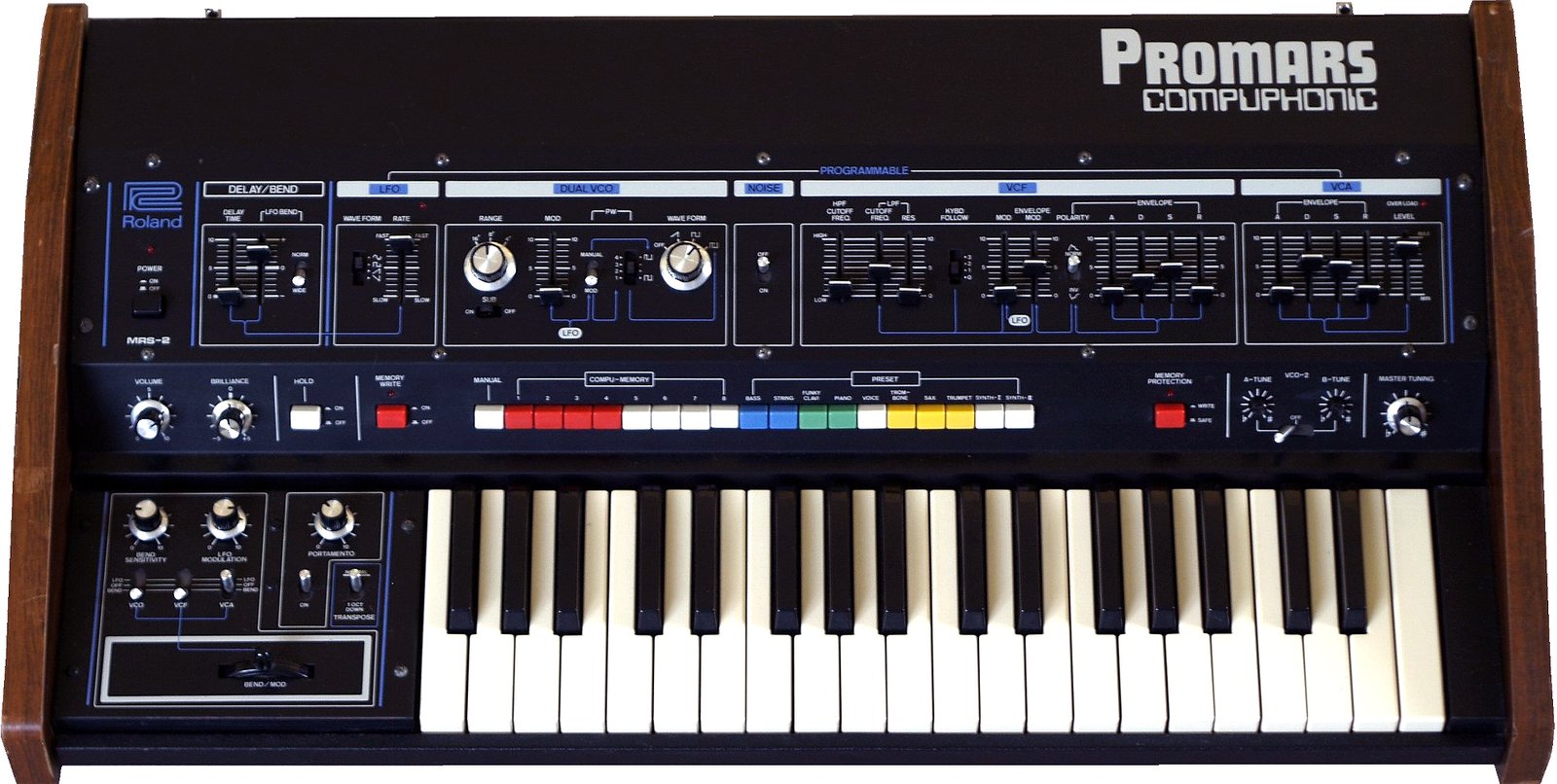 The COMPUPHONIC synthesizers uses a microprocessor chip to control the all-analog circuit voltages of the synthesizer. This computer brain provided eight (count them, EIGHT!) presets that allowed you to save and recall your favourite sounds on stage. This was a technological breakthrough in 1979 and made the JUPITER-4 and PROMARS a powerful combination on the stage and in the studio.

While not as well-known as the JUPITER-4, the unique oscillator structure and “compu-memory” of the PROMARS made it a highly regarded instrument at the time with a unique place among the classic Roland monosynths.

The PROMARS was more than a “monophonic JUPITER-4”. While the JUPITER-4 had one VCO and one SUB-OSC per voice, the PROMARS had two of each. The unique arrangement of the two VCOs and two SUB-OSC give the monosynth extra fatness compared to other “monos”. An experienced synthesist took advantage of this oscillator setup with great thick bass and lead tones available at the flick of a switch.

The blue section in the block diagram below shows the oscillator section: 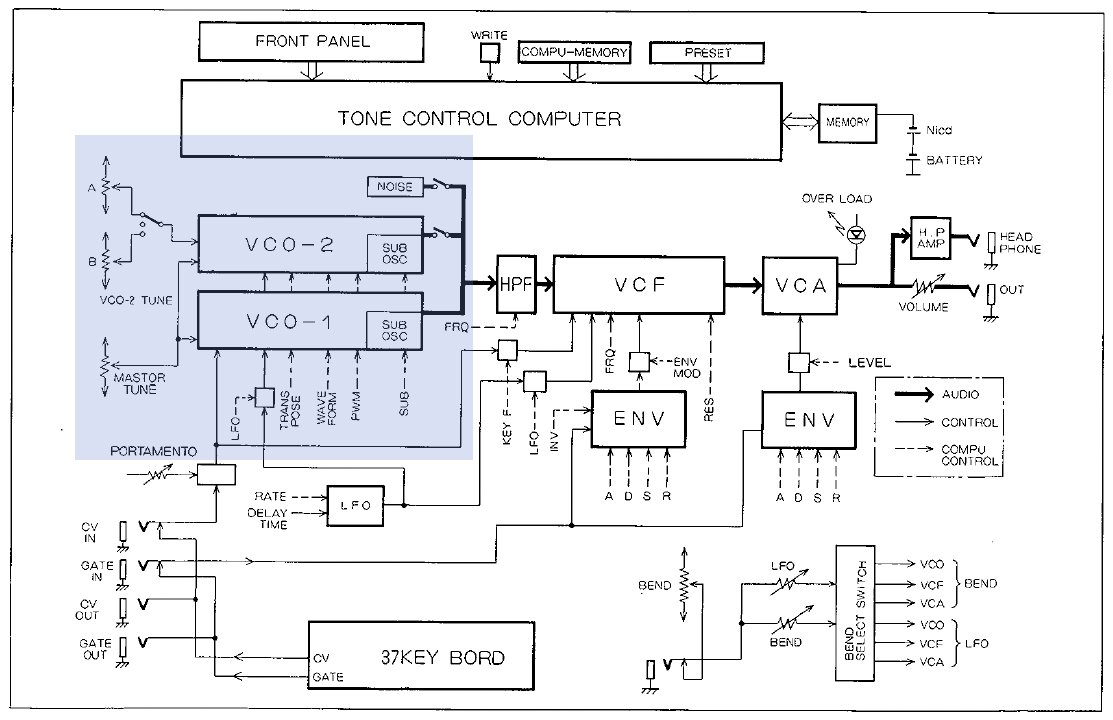 The LFO, TRANSPOSE, WAVEFORM, PULSE WIDTH MODULATION and SUB-OSC control both VCO-1 and VCO-2 at the same time. This “stacked” oscillator configuration provided the one note played on the keyboard with twice the punch and harmonics. However, the power of the PROMARS lay in two small knobs and one switch… VCO-2 TUNE A & B.

The VCO-2 TUNE switch gives he player the option of selecting between an “A” fine-tune, “B” fine-tune or OFF. This gave the synthesist three sounds with the flick of a switch; OFF gave the thick, stacked monosynth sound, whereas “A” could be slightly detuned for a chorus effect and “B” could be set to an interval (e.g. a fifth). This configuration, combined with the SUB-OSC switch, could take the PROMARS from bass territory to screaming lead in seconds.

The HPF CUTOFF FREQ is the only parameter adjustable on the HPF but ideal for shaping the NOISE source for percussive effects.

The low-pass filter, however, has controls for CUTOFF FREQ, RESONANCE, with LFO and envelope modulation. The RESONANCE of the LPF can be cranked to produce its own smooth, sine-wave tone (via self-oscillation) and can be played as an extra oscillator using 100% (“3”) KYBD FOLLOW.

But to really push the PROMARS into new sound territory, the trick is to modulate different parameters with the super-fast LOW FREQUENCY OSCILLATOR (LFO). Modulating the frequency of the VCOs with the LFO provides a warbling pitch tone depending on which of the four LFO waveforms is selected. Sliding the RATE up sends the LFO speed into the audio range turning those warbling sounds (AM – amplitude modulation) into overtone-rich, clanging textural sounds (FM – frequency modulation).

This rich timbre from frequency modulation is due to the basic waveform of the VCO changing to a much more complex waveform resulting in inharmonic sounds like bells, gongs and other percussive instruments. Add some reverb and the otherworldly sounds of the PROMARS will take you to a place few analog monosynths can.

But we thought we’d provide you with eleven patch settings, translated directly from the original Japanese PROMARS manual, that very few people will have ever heard! Click each image to enlarge:

Now you can have the PROMARS software synthesizer on your computer with Roland Cloud!

A sibling of the legendary JUPITER-4, this rare and wonderful synthesizer from 1979 features an evocative voice with a thick, rich sound, and is increasingly sought after on the used market. Sonically accurate down to the circuit level, the versatile PROMARS plug-in cranks out big bass and lead tones with the unmistakable character of Roland synths from the era.

Plug In Your Own PROMARS

Our software version of PROMARS perfectly recreates the sound of this rare, vintage instrument using original design specs and a detailed, part-by-part analysis of each analog circuit. But it also features some new capabilities only found in the plug-in:

PROMARS is also a PLUG-OUT synthesizer that can be hosted in Roland’s SYSTEM-8, hardware synthesizers. This means you can work in your computer-based DAW or perform live without a computer using the exact same sounds. You can even send sounds back and forth between the hardware and software, and use the hardware as a hands-on controller.

There are over 50 Roland virtual instruments available to you and you can also embrace the future with the new ZENOLOGY plug in. Share your sounds across software and hardware with the ZEN-Core Synthesis System. Also, keep your music fresh with genre-specific patches, patterns, and sound packs. There is a choice of membership tiers including free. Click here to find out more about Roland Cloud. 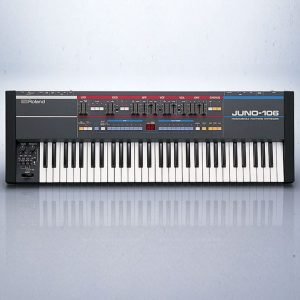 The Roland JUNO-60 helped define the sound of the ‘80s and is highly prized for its vintage vibe and unmistakable character with fat, punchy analog 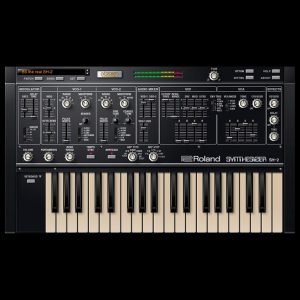 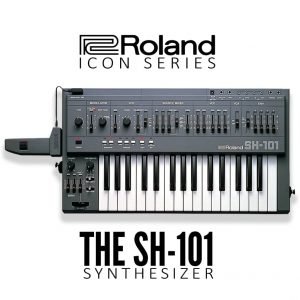