TD-9 is fine for The Wiggles! 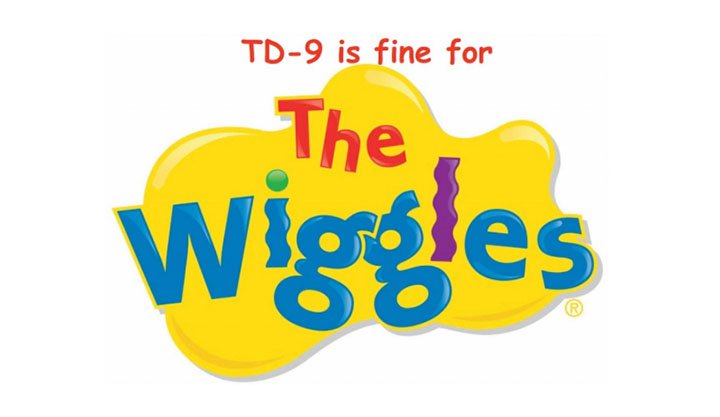 Australia’s leading musical export, The Wiggles, found that a TD-9 made child’s play of touring. Allan Leibowitz caught up with the man who chose the kit.

WHILE THE YOUNGER audience members were concentrating on the hot potatoes and Dorothy the Dinosaur, e-drum fans noticed a dramatic change in The Wiggles’ drum set-up.

After decades of touring with a Gretsch kit, the world’s biggest kids’ band has gone electronic, unveiling a Roland TD-9 kit during its recent North American tour.

Front of house audio engineer Arnie Hernandez says drummer Anthony Field (the blue Wiggle) began thinking about moving to an electronic kit a couple of years ago as he “wanted to incorporate a more diverse array of percussion sounds in the show”.

“Even though we’ve been adding a lot more percussion instruments to the on-stage arsenal (shakers, tambourines, whistles, etc.), what really appeals to Anthony about electronic kits is their versatility and the tremendous array of sounds available that he can access without losing the space on stage that all those instruments would otherwise take up,” Hernandez explains.

Field was led to the Roland TD range by his friend Noel Heraty, the percussionist for Riverdance, and the TD-9 was integrated into the first North American tour of 2010.

The audio engineer sees a number of benefits in the electronic kit. “From an artistic perspective, the creative possibilities that are opened up by having so many drum kits and sounds brings a huge array of options for The Wiggles, and allows them to go ‘all the way’ in the direction they take the audience from song to song,” he explains, citing “Marinoa Lullaby”, an aboriginal song which features ethnic instruments such as the digeridoo and claves. “The e-kit is set to the ‘Ambient’ drum patch, and so completes the texture for that song.”

He notes that this could not have been achieved with the old Gretsch cocktail acoustic kit. 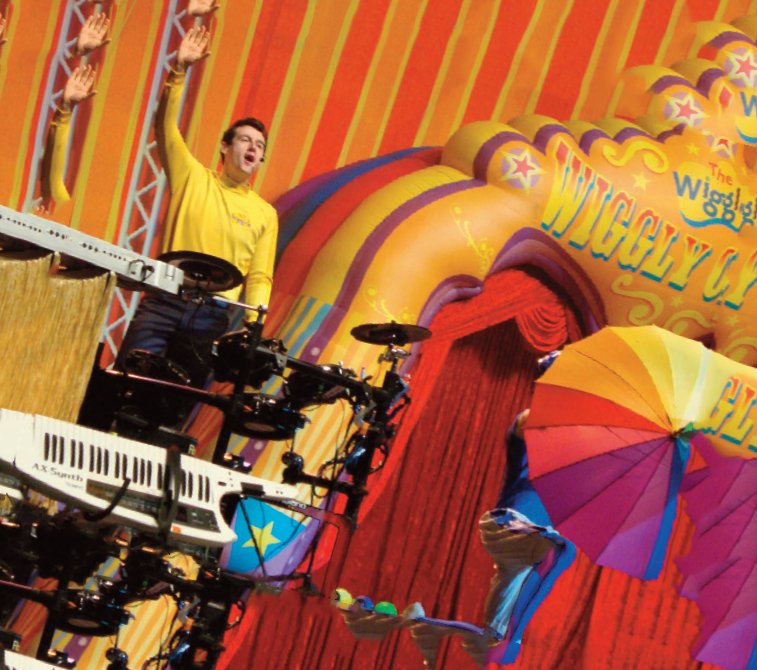 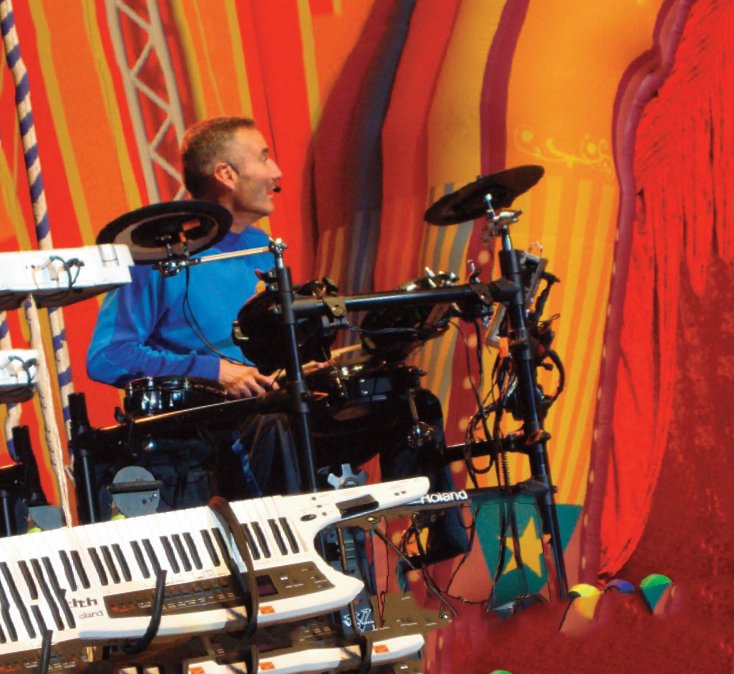 Anthony and Sam on the TD-9 in Canada

The TD-9 is also extremely versatile, so it can keep up when the show “goes smack into ‘80s rock, disco, pop and ballads”.

Hernandez notes that the e-kit goes a long way to complete the feel for each song. “Another benefit for us is artist visibility. Children respond highly to body language and the transparency of the electronic kit allows anyone playing the drums to continue interacting with the audience, which is particularly important to Anthony.

“As you can imagine, the children’s angle of view to the stage from the arena floor is quite low so, even for the acoustic kit, it was important to set it up in such a way that the children could see the person playing the drums.”

For touring logistics, the TD-9 is easier because it takes up far less space than its acoustic predecessor “so transport is better in that regard (with) fewer cases to move or lose”.

“The TD-9 frame packs into a narrow custom roadcase that also holds some hardware and the throne, and the rest goes into the soft case that shipped with the kit which, in turn, fits inside a standard ‘drum hardware-size’ case,” he adds.

It’s notable that one of the world’s leading entertainment groups and one of the highestearning enterprises in Australia chose a mid-range rather than a top-end kit. Hernandez describes this as “prudence”, saying the TD-9 “struck a great compromise between price and features”.

“Had Anthony known how much fun it is to play with all the different settings, he may well have wanted a higher model drum brain to get even more sounds and even the ability to further customise, but there’s no doubt that the TD-9 hardware package meets everyone’s needs,” says the roadie. “The mesh heads certainly feel nicer to play than solid rubber pads and I’m sure everyone that plays the kit appreciates that.”

With a bit more experience, he says, the band might have given some thought to some of the limitations such as only having a left and right output, unlike the direct outs of the TD-20, for example.

Another potential pitfall for the rigours of touring is the TD-9 cable harness which Hernandez says “clearly needs to be handled with care, but this hasn’t been a problem so far (touch wood)”. The TD-9’s two outputs are fed into DI boxes which are split to the FO and monitor consoles “in exactly the same way as all the other instruments”.

Hernandez says one difference that separates the e-kit from the way other instruments are used on stage is that in addition to normal stage monitoring, “we’ve given the drummers the option to put headphones on”.

“Anthony is the only one that uses them, but you can tell he really gets into the drums. His love of drumming really shows,” he says. 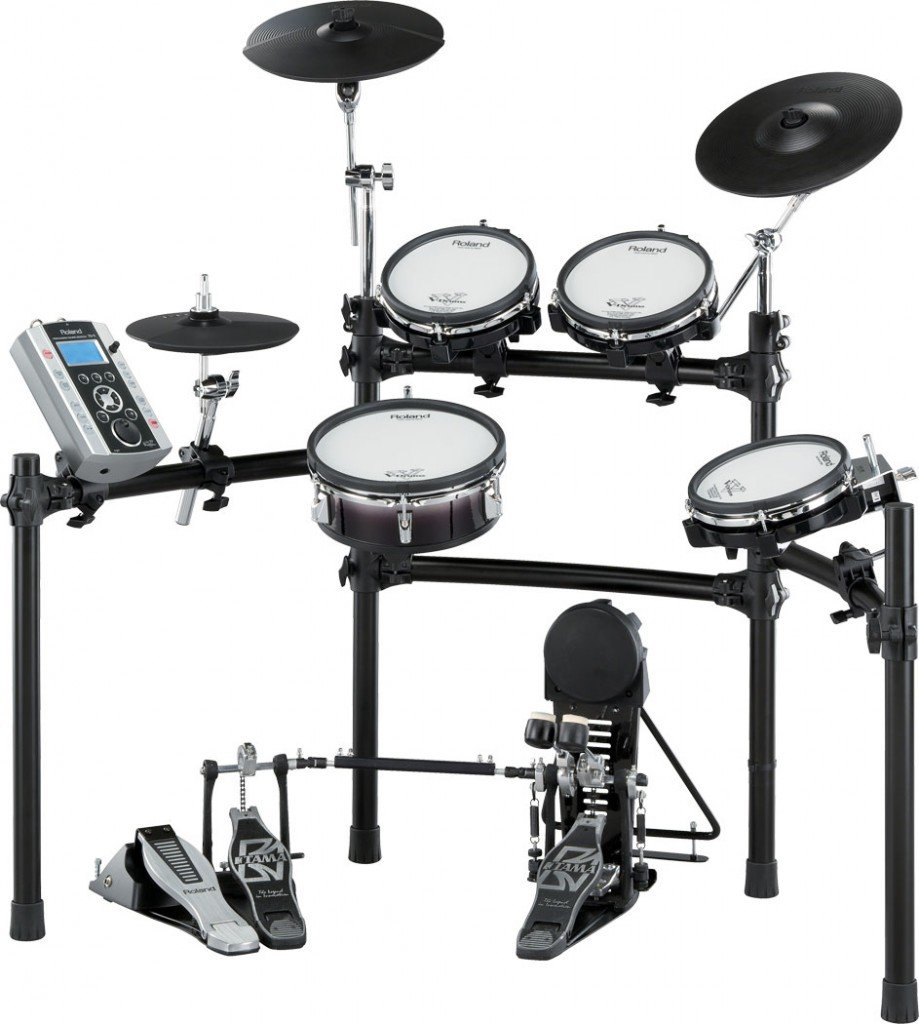 For their shows, The Wiggles largely use stock TD-9 patches. Hernandez says the on-board mixer has been adjusted to compensate for Anthony’s and Sam’s playing, along with some reverb changes, but the cymbal and drum sounds have not been changed aside from some pitch-tuning settings.

“There is one kit which is set up rather differently, but that’s because Sam plays the kit while wearing a huge inflatable fruit! He has to stand while playing and so can’t physically reach the snare pad and hihat – at least not comfortably – so those sounds are programmed to be played from toms 1 and 2.” Hernandez says the e-kit was easy to incorporate into the act. ”The initial set-up was simple and straightforward. The hardware all made sense and the sound module menus (were) easy to navigate,”
he recalls.

“I’ll admit having read the manual first, but that was early on in the research stages when we were still deciding which one to buy. Once it arrived, I physically matched it to the Gretsch kit and even had it sounding close – all in less than two hours.

“With practice, the set-up time has been trimmed and it’s now quicker than setting up the Gretsch, thanks, in part, to some home-made memory locks”. Given their extensive touring activities, The Wiggles’ TD-9 kit is set to become one of the most travelled of its ilk. Each year, The Wiggles perform live to nearly a million people worldwide. In 2010, they toured the USA, UK, Asia, Canada, New Zealand and Australia.

The Wiggles, which had their genesis in 1980s Australian band, The Cockroaches, this year celebrate their 20th year as children’s entertainers, having sold more than 23million DVDs and videos and 7million CDs globally.

In 2003, they performed 12 sold-out shows at Madison Square Garden in New York and performed to over 250,000 people in November 2005. Their US fans include John Travolta, Sarah Jessica Parker, Matthew Broderick, John Fogarty, Shaquille O’Neal, Chris Rock and Courtney Cox- Arquette. They have also toured the UK three times and were acknowledged by the Australian government as “Exporters of the Year” for their contribution to the economy.

SINCE THE WIGGLES started using their TD-9 kit, the range has had a boost, with a module upgrade and some enhanced triggers. The most obvious improvement is an additional 30 acoustic snare and bass drum sounds, taking the tally from 522 to 552. Some of the new bass sounds include a new “muted bass” effect which is triggered when you hit really hard – like burying the beater in an acoustic head. It’s very effective, but quite offputting when you’re not expecting it!

The new version also almost doubles the number of kits, from 50 to 99 (although 10 of them are blank “user kits”). The new additions include some Latin and World kits, a melodic steel drum kit, brushes, a ballad kit, some jazzy set-ups, a few more electronic kits and a beat box arrangement, among others. 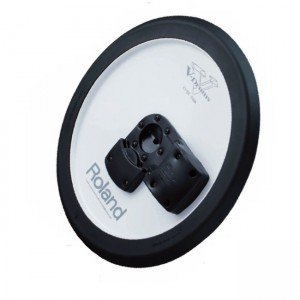 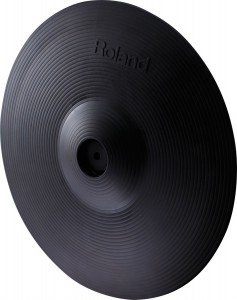 While there’s no change in the number of preloaded songs, the module gets a significant boost – and one that takes it ahead of it bigger brothers, the TD-12 and TD-20, by gaining MP3 playback. Previously, the TD-9 could only play .wav files from its USB interface, but now the popular MP3 format is also playable.

The upgrade is available on USB stick in various markets, while some Roland distributors are asking customers to send their modules in for the “turbo boost”. Unlike some previous upgrades, the TD-9 Version tweak incurs a fee, which varies from country to country. The Wiggles’ kit also missed out on some new trigger pads which were lached earlier this year in the kit overhaul. 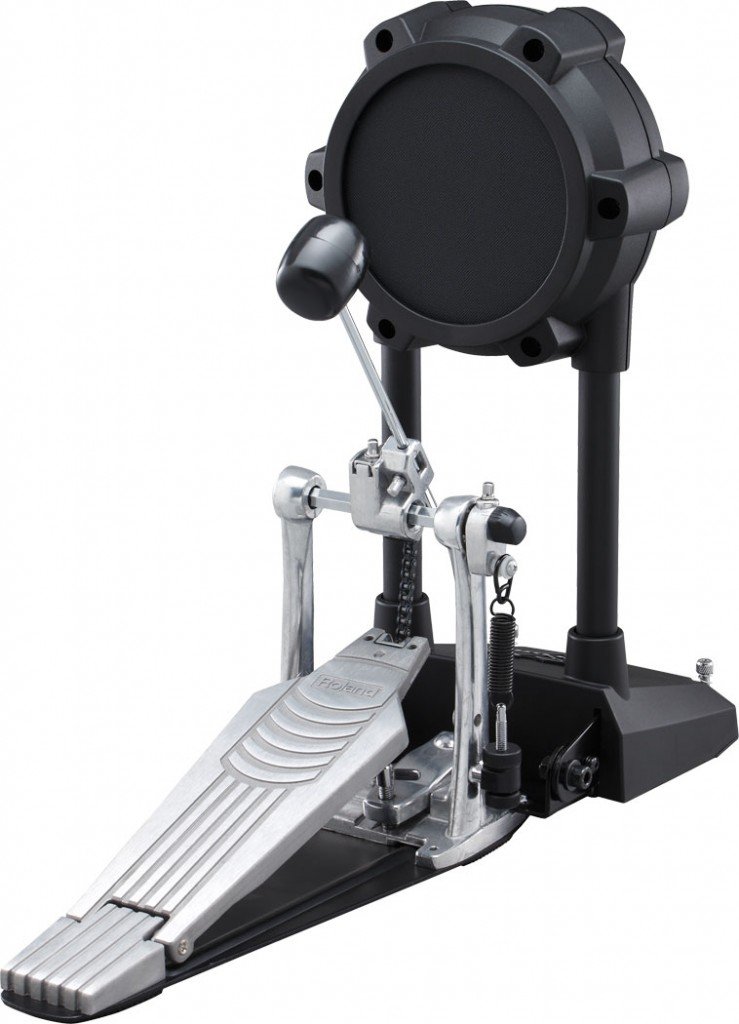 One of the key changes is the new KD-9 kick pad that replaces the old rubber-covered KD-8. The new pad has a fabric head – denser and more solid than mesh. Although the playing surface is the same – at 13 cm – the triggering sensitivity across the surface is more even, making it far easier to use double pedals. The feel of the new material is very much like an acoustic bass, without the bounce of mesh or the harshness of rubber, and the new pad is also marginally quieter than the KD-8.

The CY-8 cymbals of the original TD-9 kit have also been upgraded in the version 2 kits, replaced by dedicated ride and crash triggers. The CY-12C is not only bigger than the model it’s replacing, it also has a significantly enlarged strike zone, a vast improvement on the rubberised wedge of the CY-8. Best of all, it has a 360-degree choke and more consistent triggering

The second addition to the kit, the CY-13R, is a three-zone cymbal, with separate jacks for the bow/edge and the bell. It is a improvement on the CY-12R/C, with a lighter, more sleek design and excellent response and feel. I was, however,  little disappointed in the bell triggering using the standard setting and found that I had to hit quite hard and very accurately with the shoulder of the stick to get consistent bell sounds.

The other big difference is found only in the new upscale TD-9KX2 kit which now includes the VH-11 one-piece moving hat which mounts on a standard acoustic hi-hat stand. The VH-11 is a huge leap forward from the static CY-5/FD-8 combination, with a
real hi-hat feel.