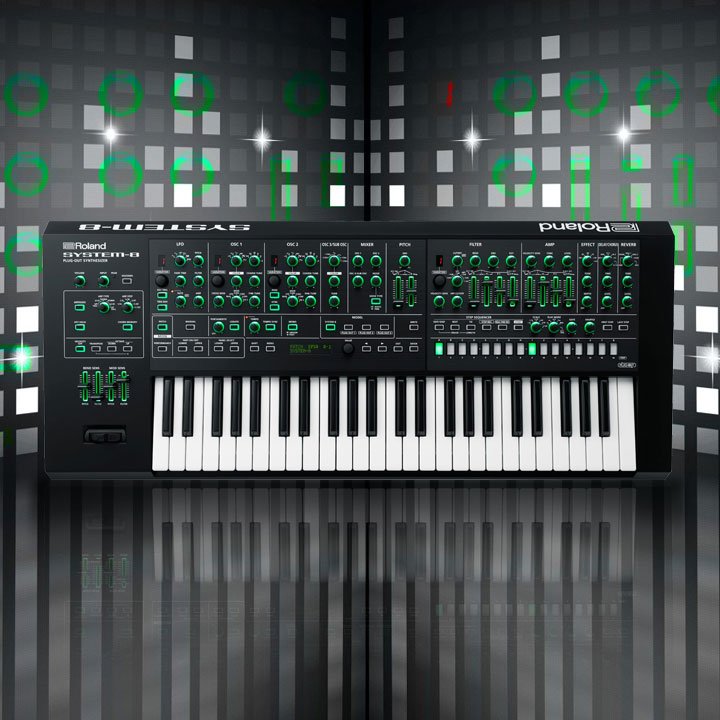 In this article, we’ll show you how to create some classic sounds in the style of popular dance genres using the Roland System-8. While some of these settings are specific to the System-8, you should also be able to reproduce them with the Roland System-1 or other similar synthesizers.

With any of these sounds, the best way to start is to set the instrument to Manual. This means that what you hear is a result of how the synth’s controls are physically set.

Then, set every control to zero or Neutral. As we don’t use every control in each patch, this will prevent you from having an unused part of the synth affecting your sound.

Contributed by David Whitehead for the Roland Australia Blog

This pluck sound works great when playing chords and gives a light, breezy feel. It’s great for House tracks, and with very little sustain, sits nicely with a four on the floor kick. Or, you can pitch it down, for a percussive bass sound.

OSCILLATORS
Firstly, on Oscillator 1, we’re going to use the System-8’s Cowbell waveform, to get a sharp percussive sound. Super Triangle Variation #2 is the Cowbell waveform.

Then, for Oscillator 2 choose the Super Square Wave. Also set this to 8 foot and set Colour to 12 o’clock.

Give the second oscillator some movement with LFO Mod and set the LFO to a Sine Wave, with a Rate of ¼ note.

Oscillator 3 is set to Sine Wave in the same octave and with the Colour at 10 o’clock.

FILTER
Set Filter to -18 slope LPF, with Cutoff at 1 o’clock and Resonance at 11 o’clock. Set the Filter Envelope of Attack, Sustain and Release all to 0 and Decay to the 3rd line.

AMP
The Amp Envelope is very similar. Again, set it to 0 for Attack, Sustain and Release. This time, the Decay is set to 4.

The Vowel waveform can give you some interesting sounds. Often used for Dubstep bass sounds, including the Skrillex sounding “Talk Bass”, it is a versatile tool for shaping sounds. We are going to make what is often referred to as a “Yoy Bass”. This is where the LFO affects the oscillator, giving a similar effect to when you open and close your mouth.

OSCILLATORS
Oscillator 1 will be our Vowel waveform, which is Super Square Wave Variation #2. Set the Pitch to 32 foot and Colour to 10 o’clock. Then, to give it the “Yoy”, set the Mod to LFO and set Cross Mod to 12 o’clock.

Go to your LFO and set it to a Square Wave, turn Key Trig on and beside the Tempo knob, turn Tempo Sync on. One of the key components of a “Yoy Bass”, is the variation of the LFO Rate. Try the Rate at 1/4, 1/8th and 1/16th notes. Often, producers will change the LFO Rate for different parts of the bassline or wobble it faster in one part of the song and slower in another part.

For Oscillator 2, we’ll use an FM Sync waveform, which is Supersaw Variation #2.
Set it to 16 foot and turn Sync on.

On Oscillator 3, use a Triangle Wave and set the Colour to 12 o’clock.

FILTER
Use a -18db sloped, Low Pass Filter Variation #1. Set the Cutoff at 12 o’clock and the Resonance at 11 o’clock. Set the KEY (Keyboard Follow) to -128 so that the Filter closes as you move up the keyboard. The Filter Envelope is set as follows:

The Riser is a classic way of making transitions between parts of a song. Often layered with a drum build, it can build tension before a drop. Shorter Risers are great for changing to a new section of your track.

OSCILLATORS
You can use any original waveform. We’re going to use two Saw2 Waveforms to make a sort of Supersaw (similar to the classic JP-8000). The first is set to 8 feet and the second to 16 feet and tuned up by +5.

AMP ENVELOPE
Especially relevant is the Amp Envelope. Attack and Release set to 0, with Decay set to 5 and a long Sustain set to Full.

Additionally, here’s an extra tip: Use Chord Memory to trigger the same note across 3 octaves and create a huge sound. Also, turn Velocity off to make your Risers the same level each time.

The classic 90s House and UK Garage organ sound has had a resurgence over the last few years, with artists like Disclosure bringing it back to the charts.

This House organ can be used as a percussive bass, or as a more traditional synth organ with a longer decay.

OSCILLATORS
Oscillator 1 is a Square Wave #1, set to 4’, which we will place low in the mix to give us some higher harmonics.

Oscillator 2 will be a Saw Wave #1, set to 8’. We are going to keep the tuning on zero, but you can also detune this oscillator by a fourth, to + or – 5, to give the sound some more synth texture.

Finally, for Oscillator 3 we’ll use the Triangle Wave, set to -1 octave.

MIXER
As mentioned, we will keep Oscillator 1 lower in the mix, set it to 9 o’clock, and set Oscillators 2 and 3 to 12 o’clock.

FILTER
Use a -18db Low Pass Filter Variation #1 with the Cutoff set to 10 o’clock, Resonance Envelope and Key all on 0. Set the Attack to 0, Decay to half, Sustain to 0 and Release to half.

AMP
So, here’s where we’ll get the option of a traditional organ or a percussive organ.

With Velocity at 0, Tone at 0 and Level at Full, set the Attack to 0, Decay to half, Sustain to half and Release to half. Or, to get our percussive sound, reduce the Release to 1.

Consequently, you may be getting some click at the start of the sound. If you want to remove this, just bring the Attack up slightly, to 1. 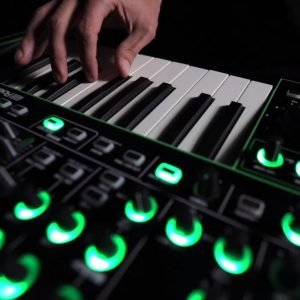 The SH-2 PLUG-OUT Software Synthesizer is a total reproduction of the classic SH-2 Synthesizer from 1979. Renowned for its raw vintage tone, the SH-2’s dual 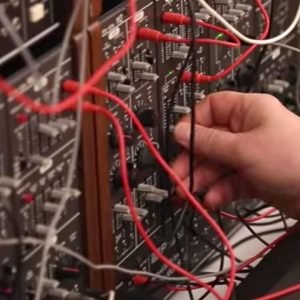 8 Things to Know About The SYSTEM-500 Complete Set

The Roland SYSTEM-500 Complete Set is a fully analog recreation based on Roland’s classic SYSTEM-100M. The modules have been adjusted to conform to the Eurorack 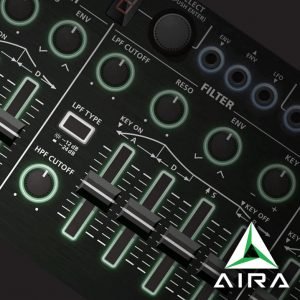 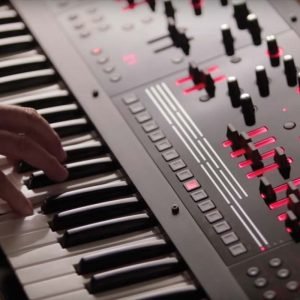 Synthesizers are amazing instruments that allow musicians to shape sound into almost endless possibilities. This enormous potential can seem overwhelming at first. However, once learned,