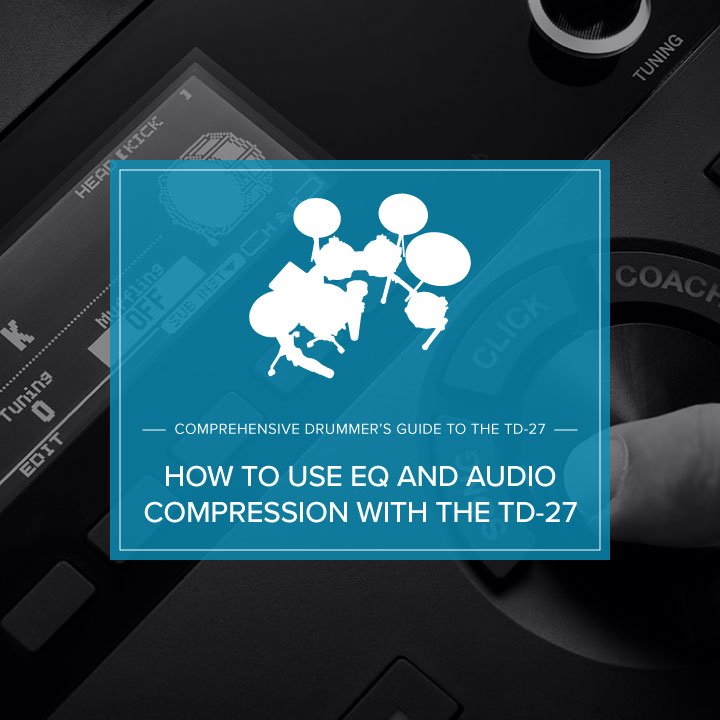 This guide explains how to use EQ and audio compression with the Roland TD-27 V-Drums.

Equalization and audio compression are methods for balancing the frequency content and dynamics of sound which we’ll explore in this guide.

When used subtly, EQ and compression can help give the final polish to sounds.

Let’s begin with using EQ and then explore how to use compression with the TD-27.

In order to improve the clarity and audibility of sounds, EQ has been used in nearly every music mix since the very early days of sound recording.

EQ comes in many hardware and software configurations, with the most common being:

For shaping individual sounds, the TD-27 features a three-band semi-parametric EQ per pad.

The TD-27 also has a four-band semi-parametric master EQ over the entire kit, for polishing and mastering the total kit sound.

See the video showing ways to use the EQ. This is done in the TD-50 module but it’s the same process with the TD-27.

What is audio compression and how do compressors work?

Now let’s look at how and why to use audio compression with the TD-27.

The TD-27 compressors were designed specifically to adjust dynamics of percussive sounds.

Firstly, let’s make sure we understand exactly what compressors do so we can best apply them.

Audio compression is used to reduce dynamic range, to improve audibility and enhance the perceived average volume, power and impact of sounds.

Audio compression is a method for controlling the dynamics of sound.

Compressors began as tools for overcoming the limited dynamic range and noise floor of early tape recorders to keep the music consistent and audible above the noise.

Along with EQs, compressors have become widely exploited tools for sound shaping.

Different types of compressors are used on drums extensively throughout the recording and mixing process. The creative use of compression on drums has become an art form all of its own.

Together with a multi-band master compressor which can be applied over the entire kit, the TD-27 features single-band compressors for every pad sound.

The main adjustments for compressors are:

The threshold determines the volume level at which the compressor starts to act on the incoming signal.

When the input volume is above the set Threshold level, the compressor begins to work.

A threshold set to maximum will not allow any compression to occur.

Setting the threshold to minimum will allow any input signal to be compressed.

The compression ratio determines by what factor the output level is reduced once the input signal exceeds the Threshold.

We can “squash” our signal quite dramatically by increasing the Ratio causing gain reduction.

If we have an input signal that is 4 decibels over the Threshold at a Ratio of 4:1, the output will be 1 decibel greater above the Threshold volume.

Tip: Compressors with ratios above 20:1 are known as limiters, as they hardly allow any signal to exceed the Threshold.

Compressors with negative ratios are known as expanders which increase dynamics.

Attack controls how quickly the compressor kicks in and starts to work, once the input signal has exceeded the threshold.

Once the input exceeds the signal level set by the threshold, we can choose to have the compressor act immediately or later.

For more aggressive or punchier sounds, long or slow attack times allow the initial sound transients to pass through first.

The initial transient also has the effect of making the sound more upfront and immediate.

Slower or shorter attack times soften the blow faster and effectively push the sound back into the listening space.

Release time determines the time it takes the compressor to return to its pre-compression state, once the level drops below the threshold.

Compression stops being effective once the level drops again below the threshold.

“Makeup gain” allows us to increase or decrease the volume of the compressed signal to account for any average loss of level from the compression.

This volume adjustment is useful because contrary to common belief, compression reduces the dynamics of a sound and as such, it makes a sound smaller – not larger.

The TD-27 compressor also provides a ‘Knee’ for control of how hard or soft the compressor acts.

As a useful starting point, try the following settings.

Compression has a multiplying effect on signals, rather than an additive one.

Each subsequent compression stage multiplies the previous one.

Compressing a drum sound by 3:1 using the pad compressor and then compressing it again using the master compressor by a factor of 5:1 gives a total compression ratio of 15:1 and not 8:1 as is often thought!

Rather than adding together, consecutive compression ratios actually multiply!

So be aware of this fact, or you will find your drum sounds becoming squashed and lifeless by the time they make it to listener’s ears.

When these already heavily compressed sounds are then broadcast on the radio or TV, they get slammed again with a hard limiter of 30:1 at least, which makes for a grand total ratio of 450:1…Ouch!

So, hopefully now, with a better understanding of the benefits of wise equalization and compression, your drum sounds and the drumming experience will be greatly improved!

Drummer’s Guide to the Roland TD-27 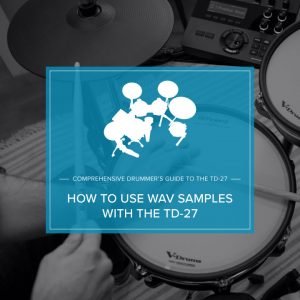 How To Use WAV Samples with Roland TD-27 V-Drums

If you’ve been wondering how to use WAV files with the TD-27, read this drummer’s guide all about triggering samples from V-Drums.   Contributed by 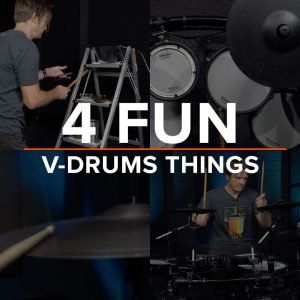 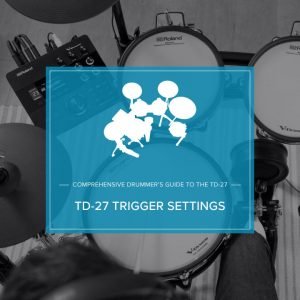 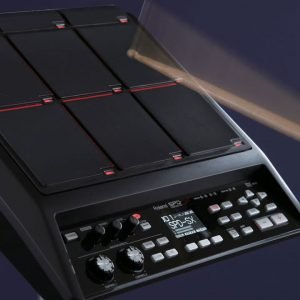 In this article, we’ll cover how to use clicks and backing tracks without becoming a slave to the rhythm. For many drummers, the mere thought

Created by Roland V-Drums specialist Simon Ayton, these patches were designed using the internal factory sounds and many of the techniques covered in the TD-27 guide. Enjoy exploring the possibilities!