How to Integrate a Modular Synthesizer into Live Performance

The first modular synthesizers created were complex instruments that quickly found a place with studio engineers and more technically minded musicians. “Modulars” were so large and expensive that few people had the chance to play with one. Keyboard synthesizers quickly became the synthesist’s weapon of choice and the more inaccessible modular synthesizer were left in storage and back rooms of studios worldwide, quickly abandoned due to its inherent limitations. It wasn’t until the late 1990’s that the next generation of modular synth was born: the Eurorack. Smaller in design and more affordable in price, this modern configuration reignited interest in the old synthesizer, sparking intense experimentation and innovation within the new format. The Eurorack format now hosts a variety of brands that work seamlessly alongside one another, allowing you to customise the synth to suit your individual needs and adjust the patches as you perform. Its tactile nature, interactive quality and vast sonic possibilities led to a rise in its use as a live performance-based instrument. Finally, the modular synthesizer could leave the studio and take its place on stage. However, one of the big challenges in performing live with a modular synthesizer is working out how to best integrate the instrument with the rest of your setup, and other performers on stage. Multiple synthesizers, controllers, drum machines, laptops with DAWs, and many other instruments all add more variables to an already complex stage setup. But there is one thing that helps pull everything together and enables the modular synthesizer to talk to everything on stage, both humans and machines. MIDI. Do not let these four letters scare you. By understanding a few key pieces to the live setup puzzle, you can have your modular synthesizer front and center at your next gig! Contributed by Hannah Lockwood for the Roland Australia Blog

MIDI is a language that allows different pieces of gear to speak to one another. It is the means of sending information between devices, and allows you to control numerous parameters within the machines. MIDI contains no audio content and instead sends out a digital message that informs your sound source how it should perform. Think of a MIDI message as the signal your remote control sends to your TV: You can turn your TV on or off, change channels, change volume and all other kinds of controls. The same is for a controller sending a MIDI message to a synthesizer: But MIDI is not the only language you must understand to master the modular synthesizer live. Learning how to “speak” Control Voltage, or CV, will help you connect external controllers to your modular and connect individual modules in your synthesizer to create patches.

If MIDI and Control Voltage (CV) are languages, then MIDI is digital and CV is analog. CV refers to electrical signals used for one module to control another. A patch is created by connecting multiple CV sources (pitch, tempo, on/off signal) to destinations by patch cables. Primarily CV is used in three key ways; modulation, gate and triggering. But at times you might have a MIDI controller/keyboard/sequencer and your modular synth only takes CV. Making this connection is key to performing live with your modular synth and lies in one piece of equipment: the MIDI-to-CV converter.

A MIDI-to-CV converter is able to speak both languages required for your live setup. It converts digital MIDI messages into an analog Control Voltage enabling you to connect your MIDI hardware to your modular. You can send note information from an external device to your modular, such as pitch and gate information, or more advanced control parameters like velocity, aftertouch, pitch and mod wheel operations. But a key factor in performing live with a modular synthesizer is keeping everything at the same tempo – or keeping “in sync”. A MIDI-to-CV converter also allows you to clock your modular from another synthesizer, drum machine or even your DAW, so that everything runs perfectly in time together. Some MIDI-to-CV converters incorporate a MIDI Out, which gives your modular synth the power to act as the master clock for your set up. 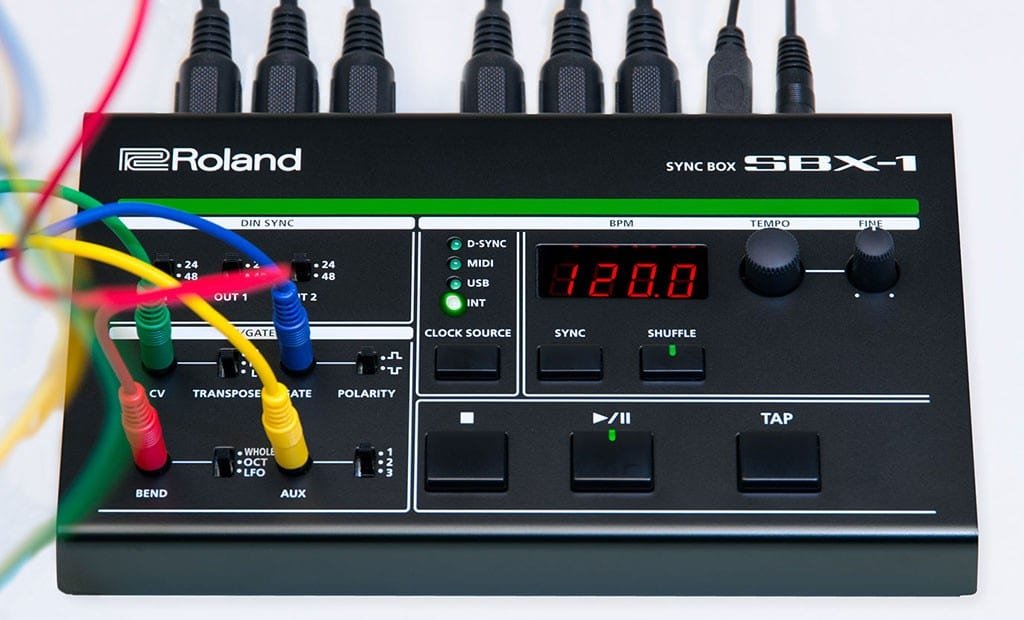 The AIRA SBX-1 allows your modular synth to communicate and synchronise with external gear, your computer and other electronic instruments.

Connecting a keyboard to your modular system, via MIDI, allows you to play the modular like a traditional keyboard synthesizer. The MIDI output of the keyboard connects to the MIDI input of the modular via a MIDI cable. The amount of MIDI data the modular receives will be dependant on the kind of MIDI-to-CV converter you use, and as with any piece of gear some are more comprehensive than others. It should be noted that some keyboards already have dedicated built-in CV and Gate outputs, which can be used to send information to the modular synth without the need for a MIDI-to-CV converter.

There are various types of sequencers, spanning both the hardware and digital realms. Both types work in a similar manner, but differ in their editing capabilities and the way information is displayed. Rather than performing live with a keyboard, a sequencer allows you to manually enter, delete and replace musical notes. Sequences can be created, lengthened, shortened and reshaped on the fly, adding a new performance element and allowing for heightened improvisation within the performance. Modulating sequencers is a technique that provides dynamic note/drum patterns and is an important consideration when performing live with a modular. Why bore the audience with a repeating pattern for ten minutes? Adding control voltage or MIDI automation to your sequences keeps your performance interesting and the listener’s ear engaged for what is coming next. Sequences can also be pre-prepared, accommodating complex, multi-part compositions. Bringing a MIDI sequence to your performance via your DAW enables you to bring your studio creations on to the stage with ease.

Who uses a modular synthesizer live?

A growing number of artists and DJs have begun to integrate modular synths into their own live sets. This additional performance element allows them to create a more unique and interesting listening experience. While modular synths have become synonymous with electronic music, they can be integrated into virtually any style of music and any live performance rig. Performers from all creative backgrounds are now using modular synthesizers in a variety of innovative and interesting ways. Here is a look at some of our favourites – Jonny Greenwood (Radiohead) Jonny Greenwood is the multi-instrumentalist and composer, best known for his work in the band Radiohead. Jonny’s modular system can be heard on some of their most revered songs, and over the years he has integrated a number of different modular systems into Radiohead’s live sets. From 2012, Jonny used his French Connection’s keyboard connected to his modular system, to play parts on tracks including How To Disappear Completely and Packt Like Sardines In A Crushed Tin Box. With his modular, he produces off-kilter beats and unusual soundscapes, using clock dividers and patch cables to change the pattern of the drums live (see Idioteque). Alessandro Cortini (NIN) Alessandro Cortini uses multiple modular systems when performing and recording in the band Nine Inch Nails. The separate modular synths are clocked together via MIDI, and the sequencer modules are synced with the master clock of the band. With his modular rig he creates dramatic percussive sounds, drones and pads, using a volume pedal to bring the modular parts in and out. He runs his modular rigs through a variety of pedals to further shape the sounds live. Kaitlyn Smith 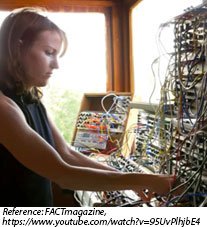 After studying composition and sound engineering at the Berklee College of Music, Kaitlyn Smith began performing in the indie-folk band Ever Isles, on guitar and vocals. She then turned her attention to the Buchla 100 synthesizer, which had a dramatic impact on her music style and performance methods. Her current live sets highlight the power of the synthesizer, turning rhythmic and melodic pulses into walls of unique luscious soundscapes. Surgeon 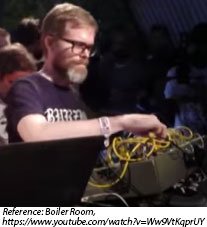 Techno god, Surgeon, made news when he performed in support of Lady Gaga on a eurorack modular synthesizer. Alongside a growing number of artists, Surgeon has also taken his modular system into the club environment, creating a hybrid live + DJ set. By syncing his modular synth to his laptop, the modular synth stays in time with the music as the tempo changes. He is then able to layer the modular synth over tracks playing from Ableton, which creates a more exciting and live feeling DJ set. This setup provides more space for creativity and adds a unique performance element, which is now being emulated around the world. Danny Carey (Tool) 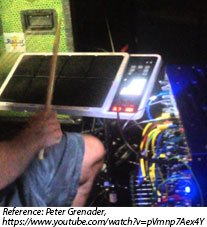 Having previously used the Roland System 700 in studio recordings, Danny Carey of Tool debuted his custom built modular rig in Australia during their 2013 tour. Demonstrating the versatile nature of the modular synth, Carey performs drum solos over the top of flying analogue synth and percussive sounds. In this video we see Carey using the Roland Octapad SPD-30 as a MIDI controller for his modular system. To do this he uses a Midi to CV Converter to trigger his modular synth. Russell Haswell Russell Haswell is the UK-based, multi-disciplinary noise artist using modular synthesis to create physical, chaotic and very noisy music. His live performances are part techno, part noise, with a strong focus of improvisation and experimentation. In his work, he highlights the power of the modular synth as a self-contained unit, and demonstrates that you really don’t need any MIDI to get the most out of these impressive instruments. The modular synthesizer is an invaluable learning and performance tool, with the ability to customize the instrument to perfectly suit your needs and desires as an artist and live performer. There are various ways you are able to integrate a modular synth into a pre-existing live setup, and the power of MIDI and control voltage allows for a smooth amalgamation of all gear types. From sequencing to performing on a keyboard, you can incorporate the modular into any style of music and any live rig. Whether you are a laptop performer, band member, or hardware player, if you are looking to add a unique element to your live set, the modular synth is an exciting option you can explore. The possibilities are literally endless with these powerful machines. 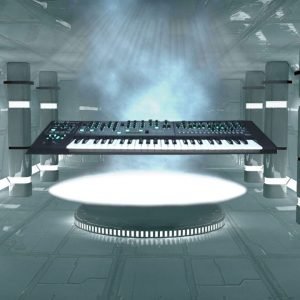 Synthesizers and science fiction seem made for each other. Strange alien noises, the pulse of futuristic streets, epic pad sounds representing distant planets…shaping the sounds 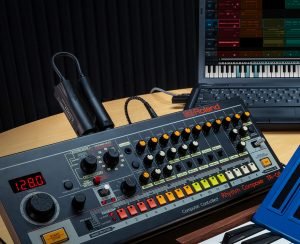 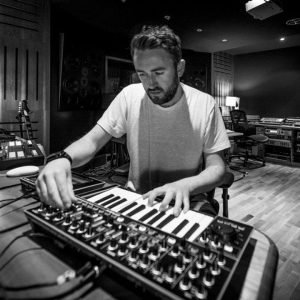 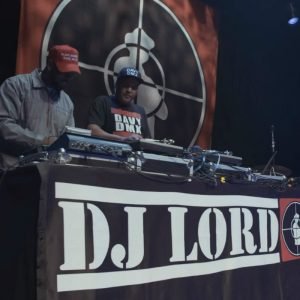 Public Enemy’s DJ Lord on terrorising his neighbours with the Roland TR-8. When it comes to the pantheon of hip-hop heavyweights, Public Enemy are top