The Evolution of Piano Foot Pedals

Have you ever wondered what some of the jacks on the back of your synthesizer or stage piano are for? On some Roland synthesizers, you’ll see inputs for “HOLD” and “CTRL1 and CTRL2,″ and on other instruments, you might see inputs for “SOSTENUTO” or “DAMPER.” These inputs are actually for foot pedals that enable the player to change the timbre or the expressiveness of the piano. The modern piano foot pedal configuration has been in its current form since the late nineteenth century, with three foot pedals: sustain (damper pedal), sostenuto, and una corda or soft pedal (sometimes referred to as the shift pedal).

“The pedal is the soul of the piano” . . . Anton Rubinstein

The una corda, invented by Bartolomeo Cristofori, was the first mechanism invented to modify the piano’s sound. This function is typically operated by the left pedal on modern pianos. A common name used today for the una corda is the “soft pedal.” Some even refer to it as the “shift pedal” as depressing this pedal physically moves the action mechanism to the right on a grand piano. The soft pedal modifies timbre and color of the tone, not just the volume of the tone. Soon after its invention, the soft pedal was integrated on pianos of all makers as a standard fixture.

By the late eighteenth century, piano builders had begun triple stringing the notes on the piano. This change affected the soft pedal’s function. On a modern grand piano, the una corda pedal makes the hammers of the treble section hit two strings instead of three. (In the case of the bass strings, the hammer normally strikes either one or two strings per note. The lowest bass notes on the piano are a single, thicker string.)

On the modern upright piano, the left pedal is not truly a soft pedal because it does not shift the action sideways. This cannot happen because the strings are strung at such an oblique angle to the hammers that if the action were moved sideways, the hammer might strike one string of the wrong note. A more accurate term for the left pedal on an upright piano is the “half-blow” pedal. When the pedal is activated, the hammers move closer to the strings so that there is less distance for the hammer to swing.

The sustaining pedal is the right pedal on the modern piano. This pedal raises all the dampers off the strings so that they keep vibrating after a key on the keyboard has been released. It adds significant expressiveness, allowing notes to resonate and certain harmonies and notes to be mixed together. The last pedal to be added to the modern grand was the middle pedal, the sostenuto. This pedal allows pianists to sustain selected notes while other notes remain unaffected.

The location of foot pedals on the piano was another aspect of pedal development that fluctuated considerably during the evolution of the instrument. Eventually, during the nineteenth century, foot pedals were attached to a frame located centrally underneath the piano to strengthen and stabilize the mechanism. This framework attached to the grand piano often took the symbolic and decorative shape and name of a “lyre,” and it still carries the name “pedal lyre” today for a modern pedal assembly.

Roland is careful to label its pedal inputs for their functions. You’ll find “Hold,” and “Sustain” along with other traditional markings. The Roland DP-10 and DP-2 are typically used as hold or damper pedals. The DP-10 is compatible with full and half-damper capable keyboards, and it can also serve as a standard pedal switch for sustain. Products like the Roland RPU-3 are designed for all three modern pedal configurations and work with instruments such as the RD-2000 and the GP609. Inputs that are labeled “CTRL” are usually inputs for foot pedals like an EV-5  Expression Pedal which can control volume, expression and other parameters in a synthesizer patch. (The EV-7 is larger and is also designed as a volume pedal for organs.) At the very least, every keyboard player should have a DP-10 and an EV-5 pedal. Many instruments come bundled with foot pedals, so check the Roland website before you purchase your new keyboard to see which foot pedals are included.

The Difference Between Acoustic and Digital Pianos 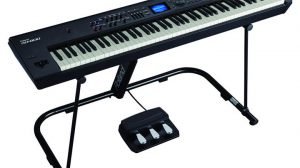 Create Your Own Piano Tone

As a life long piano player, I’m pretty picky about my piano feel and sound. So when we received our first RD-800 Stage Piano back in the